Set Wizard lets you easily pick songs from the repertoire to form the set. If a song is previously picked, either in this set or another set in this gig, it will be greyed out. Anyway, you can still pick it. Set Wizard keeps track of the length of your set as you add or delete songs so you always know when to stop. You can alter the order of songs by drag and drop.

Print directly or e-mail your setlist as PDF-attachment or plain text. SMS is also supported

Set Wizard support easy export and import of band data. By the click of one button, a special Set Wizard xml file including all data is generated ready to be sent as an e-mail attachment. Receivers can then just as easy import this file into Set Wizard and thus merge the data with existing data. This file also serves as an additional backup of your data.

Interface towards iPhone Music Player for playback of songs. Play songs from repertoire and set lists directly with one-click only

The requirements for Set Wizard were put together by the members of a real band, The Norwegian Beatles. The need for a simple and fun way to create the evenings setlist gave birth to Set Wizard. Actually the first set of requirements were written down on the Notes application on my iPhone in a band-bus on the way to a gig in August 2010.

"Often we find ourselves backstage minutes before the concert, without a proper setlist, trying to put something together on a piece of paper. These last minutes you would rather spend on other activities, like warming up your voices, rather than struggling with the setlist." 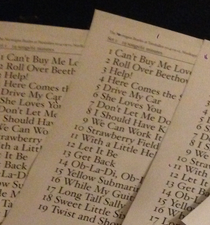